The National Highway Traffic Safety Administration has released statistics regarding seat belt use for 2016.  In 2016, seat belt use reached 90.1 percent which was an increase from the 88.5 percent use in 2015.  The report noted that seat belt use has shown a steady increase since the year of 2000, and during the same time there has been a steady decline in  the number of unbelted passengers killed in the daytime hours.  The survey also showed that seat belt use continues to be higher in the states where residents can be pulled over for the sole reason of not wearing a seat belt.

The evidence is convincing.  Seat belts save lives.  At Herrick & Hart, we see the damage each day that is caused to lives by car collisions.  By only taking a moment, a person greatly increases their likelihood of surviving a car collision. 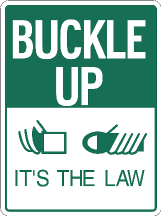 If you have been in an accident, and would like to speak with an attorney.  We offer a free consultation on personal injury cases.  Please take the time to learn of your legal rights today.